Did you know that your Internet Browser is out of date?

You are using a version of Internet Explorer which is no longer supported. This site may not function properly as a result.

We recommend you upgrade to Google Chrome, Mozilla Firefox or Internet Explorer 10+ for optimal experience.

By closing this window you acknowledge that your experience on this website may be degraded. Close This Window ×
Skip to content

Over the past few weeks, I have been working on a project for the Bank of Ireland UK with the overriding theme being partnership. The concept of partnership is most commonly attributed with marriage, more recently civil partnership, and of course, cricket. In the business world, examples of partnership include joint ventures, franchises and even colleague teamwork stretching throughout the business hierarchy. Partnerships can be found everywhere and are an essential part of life, they are the catalyst to progress, competition and success.

Partnerships however can be difficult to come by, and even once formed, they can be fragile; susceptible to a host of fluctuations, momentum shifts, moods and even unexpected success.

That said, I wanted to share a story I have of partnership which was found in the most unlikely of places; at the bolder strewn base camp of Mount Everest. On Everest at the start of the season, Sherpas are busy taking loads up the mountain, fixing ropes, establishing high camps, and generally doing tasks which would be out of the reach of all but the strongest and most physiologically adept western climber. Sherpas are born to be on Everest, literally. They have a superior oxygen carrying capacity having spent their childhood in the high foot hills surrounding the world’s highest mountain.

As a climber on Everest in 2012, I only met my Sherpa days before we started the climb up Everest. Each Sherpa is allocated to a western climber by the Sirdar, the head Sherpa for the expedition who spends an afternoon deliberating over which climbers and Sherpa’s would be most suited as climbing partners. And they do it with surprising accuracy, often matching not only the climbing ability, but also the personality.

Chhewang Dorjee was to be my Sherpa. He was of slight build, quiet, unassuming, and generally a quiet character around camp, but also strong. All Sherpas are strong, but as with many individuals, the quiet ones often have hidden talents waiting to be discovered.

Once I had done all my climbing rotations on the mountain and had successfully acclimatised up to an altitude of 7,000m, we were ready for the final push up Everest; to climb all the way from base camp to the summit and back to base camp in a period of 6 days. This would be no easy feat, nearly impossible for an individual, but within a close knit team, the seemingly impossible comes within reach.

I started climbing with Chhewang at camp 3 at around 7,000m, early in the morning. Our climb was up the steep Lhotse face, across the Yellow Band and Geneva Spur, and across to camp 4, the highest camp on the Nepalese side of Everest at around 8,000m; within the death zone. Starting from camp 3, Chhewang arrived just as I was getting ready to exit the tent. This would be the first time I had climbed using supplementary oxygen, and so Chhewang helped me to set the equipment up and set the correct flowrate. Chhewang and I had only had very brief conversations up until this point since he had been so busy ferrying loads up and down the mountain; and so given that I had an oxygen mask on, we very quickly built up a method of communicating through exaggerated pointing, eye movements and general bad acting.

Chhewang’s duty was to climb with me to the summit and ensure both of us made it down in one piece. I didn’t enjoy this pressure because I like to climb, I like to be self sufficient and I wanted Chhewang to enjoy the climb too. Even for a Sherpa, it must be a special moment to stand on the summit, like their fathers and fathers before them. Chhewang however was under great pressure, although I would only find this out later.

In line with Chhewang’s perceived duties, he would double check each time I clipped in a new rope, almost each step I made, he was watching. He wasn’t particularly old, maybe 28 years old or less, but he had summited Everest 5 times before, so he certainly felt like my guide.

The route started to get busy with climbers and soon Chhewang realised I was a competent climber, and so he set on up the mountain at a terrific pace to go and prepare camp 4, ready for us whenever we reached the South Col, many hours later.

We reached the col at 4pm after a long 9 hour day. We would set off for the summit at 8pm which only gave us 4 hours to rest and recover. Chhewang was recovering in the Sherpas tent, and I recovered with Rick and Mollie. We were all exhausted after a long day, but the Sherpas knew this so they came and helped us boil water for the summit push and generally make life just a little more enjoyable, all the while our bodies were slowly dying in the oxygen starved atmosphere.

At 7:45pm, it was pitch black. I emerged from the tent to see Chhewang waiting for me. He helped me again with my oxygen system, and we checked each other to make sure we were all set for the climb ahead. I treated Chhewang like my climbing partner, he expected to just make sure I was ready and then for us to head off into the night, but I wanted to ensure he was feeling okay too.

Once he reluctantly nodded to me, we set off into the night with only pathetic head torches guiding the way. Valerie, a Frenchwoman on our team had a torch as bright as a collapsed star, rendering our candles effectively useless when her searchlight shone up the mountain.

We climbed for 10 hours through the night. Chhewang stayed by my side for the entire climb and I felt at ease, confident in both our abilities, and whilst climbing together up towards the South Summit, I started to enjoy the experience. There was an effortlessness to our climbing, despite the ultra high altitude. In part this was due to the trickle of oxygen we were receiving each minute, but equally, we seemed to climb well together, with similar personalities and love for the mountains. The Sherpas said we had similar thumbs, and that this meant “same thumbs, different mothers”; the Nepalese for kindrid spirits, I guess. 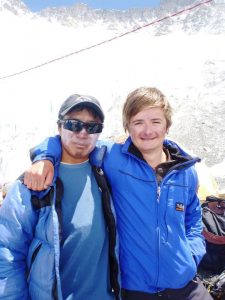 You can tell a good partner, especially in climbing, because 99% of the time, they’re just your shadow. What really sets a good partner apart though is when things go wrong. A good partner is instinctive, they suddenly become very present and quickly take control of a situation.

This was elegantly displayed when I ran out of oxygen 50m from the summit. Instead of Chhewang carrying on for the 30 seconds it would take him to reach the summit, he immediately started changing bottles and making sure I didn’t overdramatise the situation any further. Of all the places to run out of oxygen, touching distance from the summit wouldn’t be the one I would choose given that’s where the air is thinnest. Having never experienced this situation before (breathing effectively oxygenless air), I was a little taken back by the sudden desire to hyperventilate, but Chhewang was calm, did his thing, and we then stumbled the rest of the way to the summit.

In 2012, Everest was notoriously crowded, part and parcel of the worlds highest mountain, I guess. But having reached the summit with relative ease, we were a little surprised to find that we were unable to get down, simply due to the trail which was only wide enough for one climber, already being occupied by several more climbing up. It seems crazy that the most technically difficult obstacle to overcome on Everest that year were the other climbers, but I didn’t consider this when I was standing below the Hillary step wondering how I was going to climb along the narrow and infamous cornice traverse somehow passing 10 climbers already on the route. Chhewang had already climbed on to the South Summit and was waiting for me, but after an hour of waiting, he did something I thought was pretty incredible considering the altitude. He climbed on the steepest part of the cornice traverse, completely unclipped from any ropes, around all the other climbers, then on reaching my stance, tied us both together and led us both back along the route. He understood that the danger of waiting and succumbing to frostbite outweighed the risk of falling.

When climbing down from the summit, I realised the great invisible stress and pressure which Chhewang was subjected to, and which I eluded to earlier, was slowly beginning to lift. It wouldn’t completely go until we hugged at the bottom of the icefall at the foot of base camp, knowing we were safe. That pressure was the single thing which stuck out to me about our partnership. Chhewang felt, as a Sherpa, that it was his duty to reach the summit with me, and then get us both down alive again. It was so humbling to see someone who barely knew me, place such a high importance on my own life, and I realised I wasn’t just climbing safely for my own life, it was for Chhewang too. 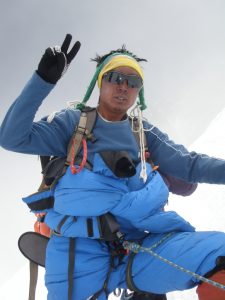 After 6 days on the mountain together, we were brothers. It is a partnership like I have never previously experienced, where you actively trust your partner with your life, having previously never met them and even without a common language to communicate with. I wouldn’t have unclipped from the rope and climbed along the cornice traverse with an 8,000ft drop below me solo, yet as soon as Chhewang reached me, I placed all my trust in him.

Of course, successful partnerships are two way processes, and I would like to think that beyond fair payment, I gave Chhewang the loyalty and respect he deserved in a climbing partner, and placed in him the trust needed to reach the top of Everest.

And that is why, each time I venture back to Nepal and see a Sherpa with whom I have previously climbed, a knowing smile crosses both our faces as we flashback to that time where we both stood at the summit of a mountain, together, and simply gazed out across the Himalaya.